I admit it: I do zumba. Please, feel free to snicker. And since the best local teacher got scooped up by the corporate headquarters, I’ve been looking for a class where smart choreography, decent presentation, and music choices overwhelm the campyness of what is, at best, a series of intricate group dance numbers to great music and at a worst, kitch layered upon kitch (Latin jazzercise.) It’s pretty simple to get ‘certified’ to teach zumba, which leads to quality control issues. I’ve tried churches, corporate gyms, local gyms, dance studios, and community-minded nonprofits that have all capitalized on this fitness trend.

Recently I signed up for a zumba class in downtown nightclub. It met during post-work gym-type hours; it was odd to see women and men in workout gear heading into a neon façade. I’d never been in the club before. It had a beach theme, complete with thatched bar. The dance teachers shared the raised stage with a DJ. (No iPod fumbling in this class.) The club lights—strobes, flashing gobos—were all going strong. There were also screens everywhere, practically required for dance venues these days. These screens, whirling with fractals, music videos, old movies, sometimes look like glorified screen savers. They serve the same function as a the tv ballgame at a local bar.

As usual, the zumba playlist included hip-hop, cumbia, salsa, reggeton, pop, Bollywood, and fusions of all of those. The session started up with hip-hop, followed by an electronic merengue, more hip-hop, a weak salsa, and some reggeton. The screens displayed triple silhouettes of dancers in three colors, then a repeating fractal. But when a pop-y Bollywood-style number started up, the screens began to flash faces of Hindu gods, traditional portraits: Ganesh, Saraswati, Shiva, Lakshmi. The Lakshimi portrait had an animated head. I waited for other images besides gods, but it was a loop. In between hip and shoulder thrusts, I tried to decide if I was offended.

All I could catch of the song’s English was about being the perfect girl for you. Through my sweat, I rationalized that this could be like the voice of Mirabai, the poet-saint, if you wanted to see it that way. “How can I abandon the love I have loved/In life after life?/Mira’s Lord is the clever Mountain Lifter:/Why would I want anyone else?”* After all, the very premise my Hinduism class is the primacy of images. Gods and goddesses are ubiquitous in India, and the traditional Abrahramic (Jewish/Christian/Muslim) prohibition on image-making has always created discomfort for outsiders looking in. So it was fine, right? Except that I had a pretty strong guess that I was the only person in the nightclub-turned-workout-studio that was thinking about this. (Probably a good thing for everyone else.)

Mid-choreography, I identified the deities by their emblems, the way I’d quiz my students to do. It was dark in there, but I thought the two women dancing in front of me looked South Asian. What did they think of this? And for folks who had none of Diana Eck’s ‘hermeneutic of the visible?’ Were they comfortable with an elephant-headed God in their exercise class? Most likely these images felt dangerously exotic, the same way that hip-hop retains enough of an edge for the listener feel cool while hearing it in the grocery store. 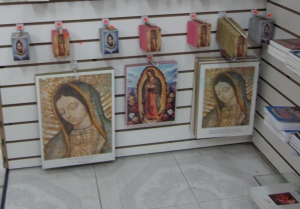 During the salsa number that followed, I watched the undulating screens launch back into shifting fractals. No La Virgencita, the Virgin of Guadalupe, her animated stars flashing. No Juan Diego cloak morphing from gathered roses to saint-silhouette. Maybe some in the crowd might blanch at that, not necessarily because it they had relationship with that image, but because they were more familiar with its sacred implications. At the same time (I countered, embellishing the turn step), it wouldn’t necessarily be out of place to those who did worship the Virgencita. She appears on just about everything you can buy. And you could argue, I guess, that Jesus can too, if you go shopping in the right places. But something tells me that this hip zumba “experience” wouldn’t put images of Jesus up on the nightclub screens while a secular pop song blared. I suspect that if they did, not even their Grupon deal could save them.

*Life without Hari is no life, friend.” In Songs of the Saints of India. Edited and translated by John Stratton Hawley and Mark Juergensmeyer. New York: Oxford University Press, 1988. Sourced from Women In World History, GMU